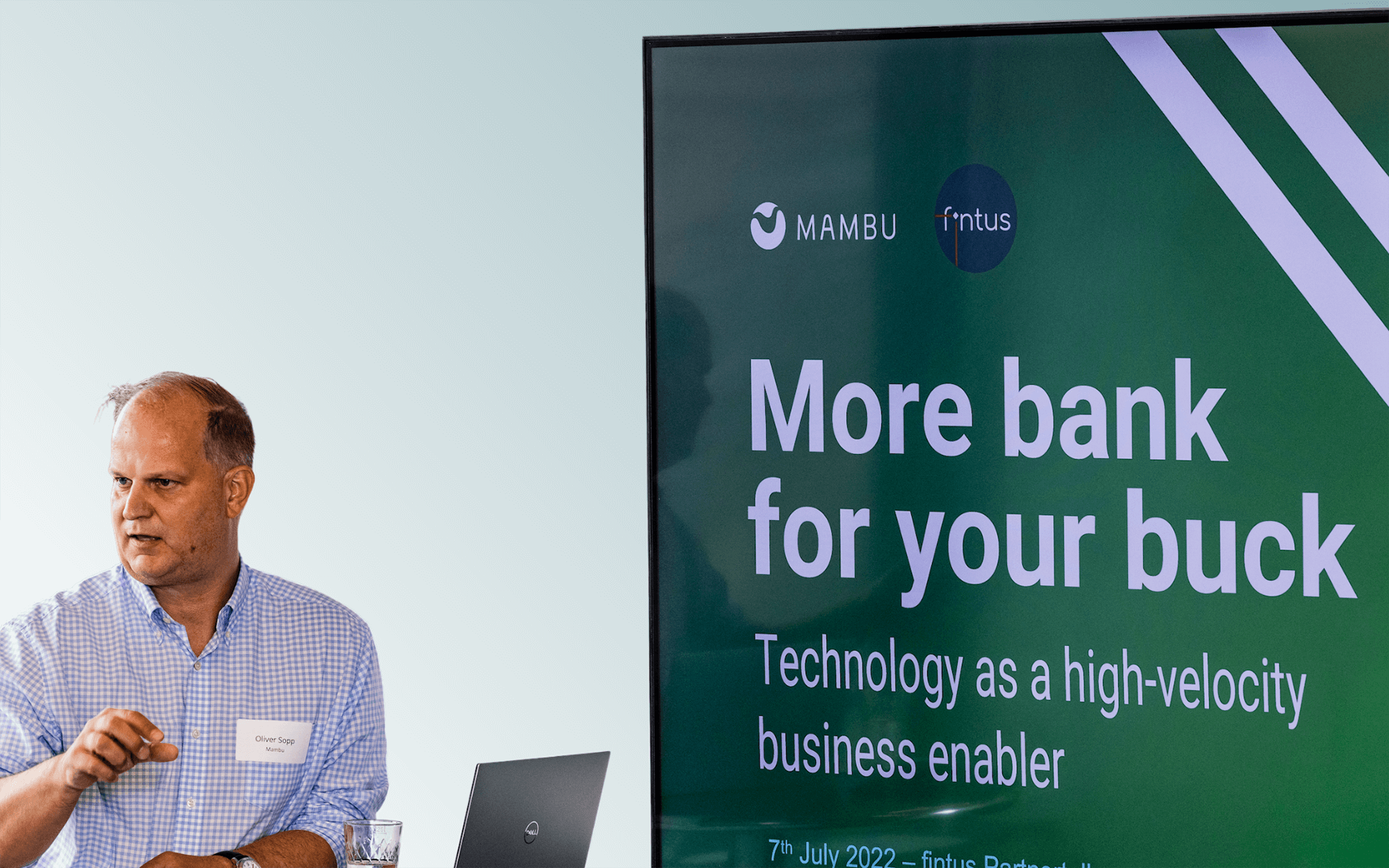 On the first day of the fintus partnertalk, exciting keynotes awaited the partners and guests. In this context, Oliver Sopp, Sales Director of the DACH region at Mambu, spoke about the current situation, the opportunities and the challenges of the digitalization of banks. For him, the gamechanger: modern core banking systems.

“Customers are saying: we want to do banking, but in a different way,” Oliver Sopp holds, thus breaking down the central challenges of banks to one sentence. “Doing banking differently” – today that means fast, digital solutions as well as interactivity, user-friendliness and many options in as few apps as possible. To get these services, Sopp says 54% of Germans can imagine working with a non-classical bank. This in turn leads to 88% of traditional banks feeling threatened by fintechs and neobanks.

Thus, the demands on banks are rising and new players on the market are increasing the cost and innovation pressure on the industry. For banks, this means providing digital and modern solutions as quickly as possible; for fintechs and neobanks, it means defending their technological advantage and establishing themselves in the market. For both parties, the key lies in faster innovation and product cycles, Sopp explains, and presents Mambu’s cloud banking platform and its approaches as a suitable solution for banks and financial service providers.

This is because classic core banking systems are reaching their limits at this pace of innovation. Many functions have not been thought through from the start and can only be integrated at a later stage with great effort. Mambu’s system, on the other hand, functions as a simple modular system (“Composable Banking”) and can be integrated in various forms at banks. This means that a wide range of system components can be combined independently of each other and in any configuration. For example, Mambu was “designed from the outset to be able to trade crypto along with it,” allowing banks to “tap into a completely new revenue stream.”

Tactical and technological collaborations, such as the partnership with fintus, would also allow the company to offer diverse and customized solutions and drive the “modernization of banking.” In doing so, the company is relying on a “high velocity operating model” and an “ecosystem approach” that makes it possible to better reach customers, accelerate the pace of development and optimize the financial outcome.

In addition to modern, technical options, however, bold modernization requires one thing above all: the courage to break new ground and to initiate major changes. This is the only way a bank can offer modern and customer-oriented services in the long term. As three central points of a successful banking mindset, he formulated a technical mindset, the provision of cloud solutions, and powerful APIs, which he sees as a way “for us all to collaborate and communicate” with a view to the partners present.

Mambu is the cloud-native core banking platform where modern financial experiences are built. In 2021, Mambu reached a company valuation of €4.9 billion, making it one of the highest-valued B2B SaaS companies founded in Europe. Mambu support 230 customers in over 65 countries – including Solaris, N26, as well as established institutions such as Raiffeisen Bank in Austria, ABN AMRO in the Netherlands, Commonwealth Bank of Australia, and companies such as Western Union. Mambu most recently won the Fintech Germany Award 2021 in the “Growth Stage” category.

Merry Christmas and to joint success in 2023!

Report about the internship at fintus

After many years of joint project work, Vanessa Torno is moving from ...