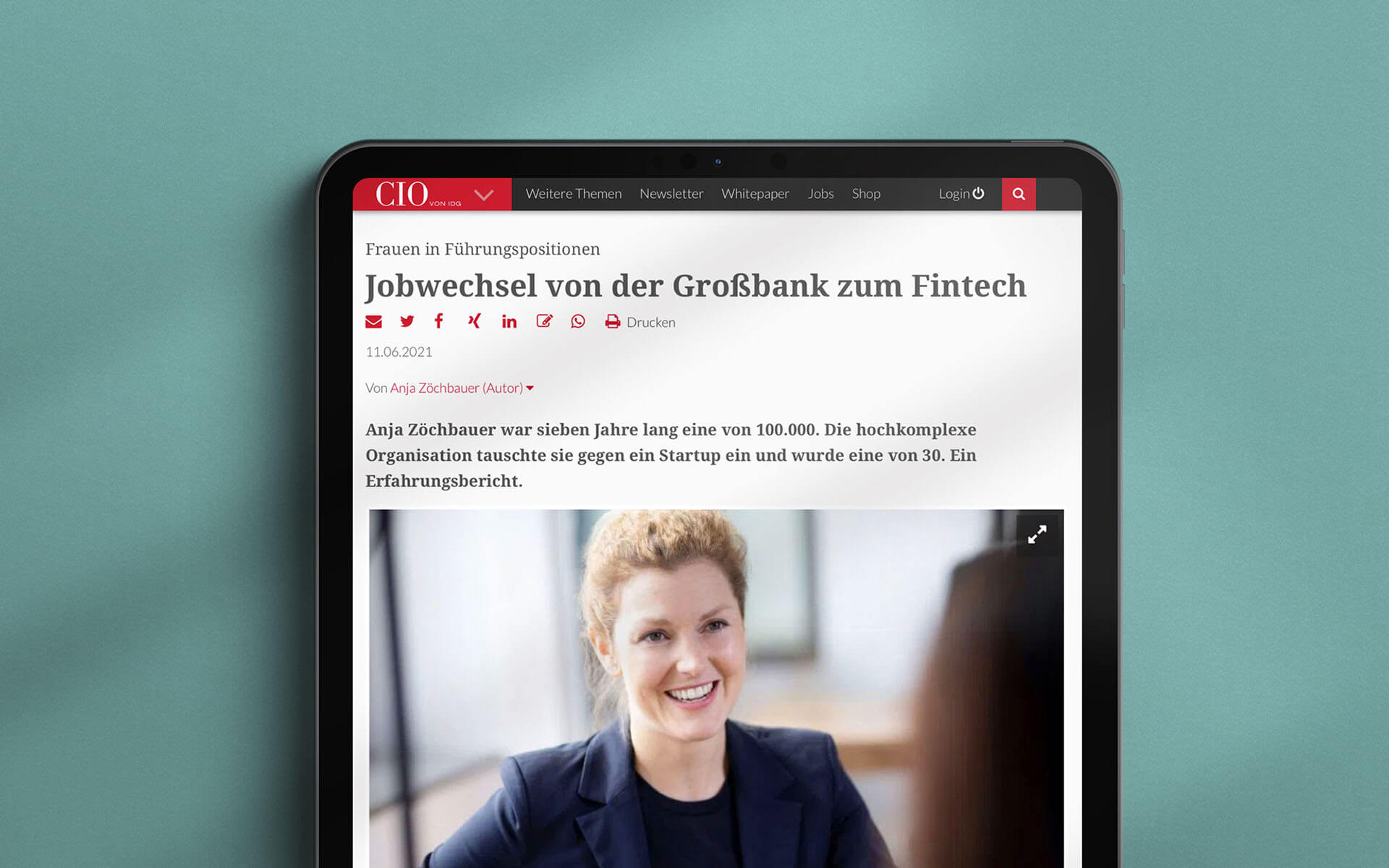 Anja Zöchbauer was one of 100,000 for seven years. She traded in the highly complex organization for a startup and became one of 30. An experience report.

(Published on cio.de on 06/11/21) Monetary policy, finance, and the stock market have fascinated me since I was at school. So joining a major bank after graduation was an obvious choice. But I have also always been enthusiastic about technology. So my move to agile fintech, which is heavily influenced by technology, was the next logical step. There, I can combine my affinity for the world of finance and banking with my unconditional desire to digitize it.

When the CC line becomes the enemy of digitization

One of the reasons for the change was also the curiosity to work in a different way. Large banks are highly complex organizations, so paths and decision-making processes there are often long. Communication with superiors and colleagues also requires a great deal of tact, just as in politics. The need to be involved in all planning and decision-making processes down to the smallest detail is very pronounced. Working days are therefore dominated by many meetings and e-mails, in which everyone involved must always be copied – and in such a large corporation, there are usually quite a few of them.

Especially when it comes to the digitization of banks, these circumstances tend to be a hindrance. Even though banks take the topic very seriously and invest a lot of time and money, their digitization is not progressing as quickly as would actually be desired and necessary. There are a number of reasons for this, which in turn are closely linked to the structures and working methods described above.

As an employee in a large corporation with around 100,000 colleagues, it is often not possible to push ahead with heartfelt projects as quickly or in the desired form. One’s own contribution to the overall performance and development of the company is often unclear, if not invisible. Things are quite different in the startup world.

The fintech sector had attracted me for quite some time anyway and was already very familiar to me through my MBA thesis and my personal network. So I knew that this is where the digitization of the financial world is being driven forward by bright minds, the latest technologies and a large portion of entrepreneurial risk – this is where I can make a lasting difference. In my new team of initially around 30 colleagues, everyone has the space they need to develop new ideas, and everyone takes responsibility for the results. There is an atmosphere of authenticity in which everyone can be who they are. At the same time, a high level of motivation is required, because the work of the team determines the success or failure of the company – and this has existential dimensions.

Symbiosis between fintechs and banks

It’s very motivating to know exactly where we are as a company and where we want to go strategically. So the meaning of my work is also clear at all times. And unlike the Group, the motto here is “Don’t talk long, just do it!”

This transparency, coupled with the freedom to shape things and the short decision-making paths, means that I can do one thing better every day and take us a little further forward. Meanwhile, the goal remains the same: the digital transformation of the financial industry. A symbiosis between fintechs and banks can achieve just that.

So, if you want to gain a foothold and make a career in the finance and tech world, there are two very different working worlds open to you. In startups, there are always changes in objectives or opportunities that you hadn’t previously considered. If you’re flexible, able to learn and always want to face new challenges and implement fresh ideas that arise along the way, you’ll find the right working environment here.

Those who prefer a more secure, predictable environment with mostly given structures are better off in larger companies. But you shouldn’t see it as an either/or decision. Knowing both worlds is worthwhile in any case, as paths can cross again and again, for example in joint projects.

In terms of diversity, equal opportunities and family friendliness, large banks are well positioned in my experience. I had female role models there in both banking and tech, and I was always given the feeling that I was fully accepted and had the same career opportunities as my male colleagues. So women should by no means be put off by the stereotypical image of an all-male banking environment.

Passion and curiosity make it work

There are also more and more women in the fintech sector. In our development team, the proportion of women is even around 50 percent. Although this is not representative of the industry, it shows that we are on the right track. Anyone who brings a good dose of curiosity and openness to the table will find their place in both the corporate and fintech worlds, regardless of whether they are a man or a woman. In short: If the passion for the topics is there, go for it.

The original article and other interesting information can be found here:
https://www.cio.de/a/jobwechsel-von-der-grossbank-zum-fintech,3661312

Anja Zöchbauer joined fintus in 2019 after seven years at a major German bank to drive the digital transformation of the financial industry.

Digitization in banks: No room for couch potatoes

Benjamin Hermanns founded the fintech Fintus in 2016 out of a passion ...

In the banking sector, wish and reality collide time and again. When ...

In many places, there is still plenty of room for improvement in time ...